The fair SCHULBAU is an international forum and trade fair for all aspects of educational building. Take part in large and small scale projects, design Germany's future, and expand your areas of business. SCHULBAU is now entering its fifth year, launching trade fairs number 8, 9 and 10 in three of Germany's most attractive cities.

Every year, SCHULBAU brings together the most inter-esting and prominent stakeholders in the industry, so networking in the B2B area is the driving force behind Germany's only trade fair linked to investments. In its friendly atmosphere, you'll be able to establish new con-tacts, maintain existing ones, and fi ll your order books.

The services, products, and innovations shown by over 60 select exhibitors get trade visitors excited every year. For the duration of each fair, SCHULBAU host cities are not only involved with its top-rate specialist talks and work-shops, they also act as exhibitors, which means they're more accessible than at any other fair. Due to restricted admission, the SCHULBAU Forum and Trade Fair is only open to exhibiting businesses. 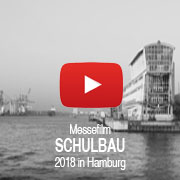